As writers, we’re commonly asked which authors have influenced our work. As a follow-up question, we may be prompted to discuss movies, TV series, media properties, etc. that have been impactful in shaping our writing. These are valid questions that shed light on our creative impetus, style, and tastes.

That said, such questions often give me pause. In responding, I must make the decision to provide what I perceive as the expected answer, or challenge the assumption that the major influence on my writing has been my consumption of narratives in a physical or visually recorded form.

For the most part, I play along and provide a list of icons and commercial properties that have been formative for me: Mary Shelley, Charlotte Brontë, Shirley Jackson, Ursula Le Guin, George Orwell, Angela Carter, The Addams Family, Poison Ivy, Gargoyles, and Alfred Hitchcock. I’ve found it easier to focus on Western texts that I think the mostly American interview readers can identify with, rather than delve into the complex history that has shaped my mindset. I conceptualize this as a list of “influence comps’’ that will make my creative process relatable and accessible, similar to when one is pitching a novel to an agent or editor.* But while these creators and works are very dear to me, a larger portion of what fuels my art springs from the value for unrecorded oral storytelling and creativity inherent in my heritage and Caribbean culture.

In a group interview with Caribbean Beat Magazine, “Stories of What-if,” Nalo Hopkinson, when discussing a panel (upcoming at the time) featuring Caribbean writers, wrote:

We might also talk about language. The multiple consciousness that Caribbean history gives us is reflected in our code-switching, code-sliding, code-tripping dancehall-rapso-dubwise approach to signifying simultaneously on multiple levels. Science fiction reaches for that in its use of neologisms. Caribbean people, like so many hybridized peoples the world over, live it. We are wordsmiths par excellence.

Nalo’s description captures my relationship to language and storytelling perfectly. (I recommend reading the entire interview!) Caribbean people, from award-winning writers and academics to my grandmother who did not attend school and was married off at fourteen, have a way with words. My parents and extended family, who immigrated to Canada and who do not have more than elementary school educations, are phenomenal storytellers. They have a sense of rhythm and flourish when sharing an incident from work or relating the “bacchanal” at the grocery store that is full of spark and energy. Telling a well-timed joke, pun, or a compelling story when you are hanging out, or “liming” as Trinidadians say, is a skill I grew up revering. It was vital, not only as a source of joy in dire times but as a vehicle for maintaining our history and cultural identity in the face of a past filled with colonial violence and forced disconnection.

Just as the Indigenous natives of Trinidad and the enslaved and indentured people brought to work plantations defiantly held on to their cultures through stories and creativity, Trinidad’s rich oral folklore, with its Soucouyants, Douens, Churiles, Lagahoos, jumbies, and all manner of spirits, came to Canada with us. Along with those stories, my parents brought tales of Hindu gods and goddesses stretching back to South Asia, as well as a respect for Obeah and its rituals of West African origin. (There is a story on my mother’s side of the family that her great Aunt, who people called Drake Alice, was an Obeah woman.) This fusion of beliefs, practices, and narratives that has evolved through centuries of colonization, genocide, enslavement, indenture, and independence continues to evolve today in Trinidad, and with me when I write in Canada.

The inclination to fuse, combine, adapt, and then retell is part of a mode and mindset that many Caribbean people share. We are comfortable with speculative landscapes and grappling with the perennial question “what if” because our survival has been predicated on using the materials we have, combining them with what we find, and smashing them together to create something new.

Further, this speculative approach to life has touched every aspect of our culture: our food, music, writing, and visual arts. Trinidadian food is a delicious mashup of South Asian, West African, East Asian, and Indigenous-originated flavors, among others. As another very quick example, Soca music, a predominant genre in Trinidad’s Carnival, is a fusion of Calypso music developed by Afro-Trinidadians and East Indian beats derived from Indo-Trinidadian music. This type of fusion and creation, more so than any book or completed “work” produced by any one individual creator, is at the heart of my compulsion to make art. It is a continued lived state and a legacy I uphold. The speculative is not theoretical for me: a neat thought-experiment where I pursue a set of circumstances to their eventual conclusion. I am the result of such an experiment; I am at my core a speculative being.

I began this essay with a list of Western writers and works that have inspired me. As a counterweight, I will end with another brief example of Trinidadian speculative cultural perseverance and ingenuity that has motivated me my entire life.

Trinidad’s national instrument is the steelpan. As a teenager I was part of the steel band at my high school, which had a very large Caribbean immigrant student population. The pan is a melodic percussion instrument played with rubber-tipped mallets and made out of industrial steel drums. I first learned about pans as a young child from my parents. I remember them telling me that Trinidad, being rich in oil, had many discarded oil drums lying around. People took these drums and fashioned them into instruments and created an iconic sound that is identifiable across the world. The idea that people could take what was essentially refuse and make it sing in celebration blew my mind.

As part of the band at school, I learned that pans have an even longer history rooted in resistance. Briefly, they evolved from African stick fighting and percussion, a tradition that was brought to the island by enslaved West Africans. In the late eighteen hundreds stick fighting and percussion were banned by colonial authorities who wanted to restrict Carnival. The Canboulay riots ensued, which resulted in loss of life and the banning of other percussive instruments by the Colonial administration. The tradition hung on in spite of persecution and repression, and remerged in Lavantille in the late 1930s with the steel pan and other instruments. To this day, any informal party with my family at someone’s home features singing accompanied by uncles and aunts clapping, banging sticks, and playing percussion on beer bottles and cheese graters. It’s a sound of joyous resistance in the face of brutal oppression, and the spirit I want to embody when I sit down to write. It is this ongoing, undocumented work, that people of all cultures have, that often goes unaddressed in interviews. More so than any singular work, my peoples’ drive to keep their history and identity alive while cultivating joy will always have the biggest influence on my writing.

*Editor’s note: “comps” is an industry term meaning a comparison between a proposed (new) work and other well-known works. “Comps” are used as shorthand to describe the new work, so that potential buyers, agents, and readers can more easily imagine what the book is doing. Such as “a futuristic, Black Panther-inspired Nigeria” (comps for Tochi Onyebuchi’s War Girls) or “Pacific Rim meets The Handmaid’s Tale” (comps for Xiran Jay Zhao’s Iron Widow). 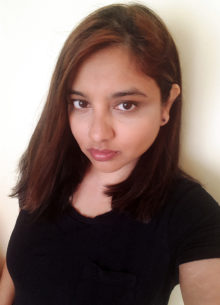 Originally from Trinidad and Tobago, Suzan Palumbo is a Nebula finalist, active member of the HWA, Co-Administrator of the Ignyte Awards and a member of the Hugo nominated FIYAHCON team. She is also a former Associate Editor of Shimmer magazine. Her work has been published in Neon Hemlock’s Unfettered Hexes, The Deadlands, The Dark Magazine, PseudoPod, Fireside Fiction Quarterly, PodCastle, Anathema: Spec Fic from the Margins and other venues. She is officially represented by Michael Curry of the Donald Maass Literary Agency and tweets at @sillysyntax. When she isn’t writing, she can be found sketching, listening to new wave or wandering her local misty forests.