Talking to the Dead

Ah, Necromancy, the bad boy of the sorcerous arts. The title necromancer has been applied in fiction to everything from spiritualists to lich lords, from zombie masters to dark wizards, and will continue to be re-imagined ’til underverse come. But what are the real-world examples and practices of necromancy? And do you really have to dress like Dracula’s flamboyant goth cousin to be a necromancer? 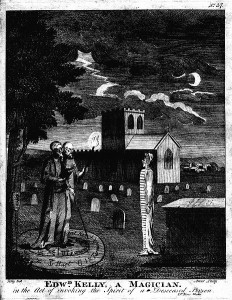 NECROMANCY AROUND THE WORLD

The word “necromancy” supposedly comes from the Greek word “nekros,” meaning dead, and “manteia,” meaning divination or prophecy. Personally, however, I think the word necromancer comes from “necromus“, meaning “pale and smells a bit odd”, and “ancer” as in you’d better ancer when the dead talk to you.

Because necromancy is all about talking to ghosts and spirits. The means and applications of doing so are what have varied with time and across cultures.

The Greeks and Romans believed in some cases that necromancers went physically down into the underworld to speak with the dead. In Virgil’s Aeneid, for example, Aeneas travels into the underworld to consult with his dead father, using an oracle as his guide. But getting to Hades is a pain, even compared to the groin check at U.S. airports, and humans are creatures of convenience. Thus, it is more often the case that the necromancers make the dead come to them.

In the Judeo-Christian First Book of Samuel, King Saul secretly consults a necromancer, the “witch” of Endor, to summon forth the ghost of the prophet Samuel. Opinions differ on how to interpret the story, but it is clear the people of Saul’s time and culture believed necromancy was real.

Early Hawaiians had some of the most lucrative variations on necromancy. There were necromancer extortionists called kahuna kilokilo who would come up to you and claim your own spirit had appeared to them in a vision and accosted them. They would warn that you were in great spiritual peril, and only by providing a feast and paying off the kilokilo would he perform the necromantic ritual to summon your spirit, clear away its sins and make you safe. They were the roadshow evangelists of their day.

Hawaiian necromancy wasn’t all extortion. There were the more benign makaula prophets, who could catch the ghost of anyone you wanted in their hands and stuff it into food. If you ate that food you could then see the spirit of that person yourself. It’s not clear if you got to pick the food or not.

Indeed, every culture that believes in ghosts or spirits has some form of necromancer who will try to communicate with those spirits, from Egyptian and other African cultures, to the ancient Celts, to the American Eskimo. In fact, speaking with spirits or visiting the spirit world has been a part of Shamanism since the Neolithic, if not the Paleolithic Period, long before organized religions or gothic fiction weighed in on the matter of ghosts or souls.

And understandably so. After all, a ghost surely has the wisdom he or she not only gained in his or her life, but also whatever knowledge and perspective comes after death, right? Heck, plenty of scholars would love to summon Shakespeare and hear what he has to say about Hamlet and fardel-bearing now.

HOW TO MAKE FRIENDS AND INFLUENCE DEAD PEOPLE

Anyone who has played with a Ouija board or said Bloody Mary into the mirror twelve times at midnight could be said to be playing at necromancy. Similar folk traditions exist around the world—in Japan, for example, one way to summon a ghost is to fill a paper lantern with one hundred rushlights and blow them out one at a time, then wander off to a dark and quiet location to blow out the last rushlight. A ghost is supposed to appear the moment the last light is blown out.

But to be a true necromancer (assuming necromancy is truly possible), you have to be knowledgeable and skilled in specific rituals, and successful at actually communicating with spirits safely. The methods and rituals of necromancy differ from place to place, source to source, but generally speaking, there are three parts to necromancy: calling up a nice spirit who can tell you what you want to know; holding the spirit long enough to have a real chat; and keeping yourself safe as you work so that evil spirits don’t interfere, or make you projectile vomit split pea soup and contort in ways your yoga instructor could only dream of.

In the West we have a popular history of mediums conducting séances to summon forth a spirit, with a circle of protection made of humans linking hands. But the American and European concept of “necromancy” specifically, as opposed to the practices of mediums or spiritualists, has developed to resemble the arcane rituals you might associate with joining a secret society, or possibly a fraternity (but with a lot less alcohol).

These necromantic rituals involve days or weeks of mental and ritual preparation, drawing arcane diagrams on the ground, and the necromancer dressing up in elaborate outfits and performing sacred rites, usually invoking a mixed bag of powerful beings for protection and assistance, from the Judeo-Christian archangels to the Greek, Egyptian, and Mesopotamian gods.

And necromancy comes in two flavors—summoning, and ewww-gross, since you can either summon a ghost or cause a dead body to speak. The dead body method usually requires a bit of grave robbing and is therefore less likely to impress your date or make the police your friends. In either case, motivation is said to be important. Summoning the spirit for reasons of love, or for important information that is required for good and noble reasons, will present less risk and take a lesser toll on the necromancer. Which brings us to our next topic…

This is, of course, a subjective question. All magic, even Harry Potter’s most innocent wand wave, may be seen as evil by some, and necromancy has the added bonus of dealing with the dead and being portrayed as evil in most fiction. In fact, the medieval Latin derivation nigromancia is the source of the term “black magic.”

But while necromancy can, in theory, be used for evil (like anything else), its stated intent is not usually about The Evils. Many of the rituals include invoking the names of God, writing holy symbols, and using the Bible or other holy scriptures to ward off evil spirits and protect the necromancer during the ritual. There are even specific rituals for calling forth ghosts of people who followed Judaism or Christianity that include invoking the aid of Solomon. In fact, one might go so far as to consider Jesus a necromancer, since he was reported to have spoken to dead prophets, raised the dead, and cast out evil spirits, though of course actually applying that definition may be offensive to some followers of the Abrahamic religions.

Certainly, if you want to summon the devil or demons, that’s not considered necromancy, but falls more under the category of darkwizardwannabemancy. According to the tales, evil spirits are always happy to come set up shop in your flesh, make a compact for your soul, and give you wicked rotten egg breath—no complex ritual or heavy metal music required.

Although the preparation and encyclopedic knowledge of ancient symbols seems daunting, it is, in a way, egalitarian. If those who believe in mediums are correct, necromancy is something that some people are born with. It’s an innate connection to the spiritual world that others can’t share. If it’s a set of arcane rituals, then anyone can do it the way anyone can do a set of math problems if they spend enough time with their head in a book. So yes, with a lot of practice, preparation, and care, you too could be a necromancer—goth shopping spree entirely optional.