Ten Reasons to be a Pirate

by John Baur and Mark Summers

When people stumble into the pirate world—like drunken sailors stumbling into a seedy dockside tavern—they do it for one reason, the same reason that men and women became pirates in the golden age of pirates: Pirates are cool. They were cool then, they’re cool now, and they always will be cool. But that’s really no answer. “Because they’re cool,” begs the question: What made them cool? Here are some reasons for taking up a life on the account.

Call it booty, swag or treasure. Count it in gold or jewels, doubloons or bolts of fine silk. Hunting down Spanish galleons and relieving them of their goods was what pirating was all about. Pirates came from a time when a person’s social standing was set at the moment of conception. If you had aristocrats for parents, you’d be an aristocrat. If you were born to a family of peasants, you were a peasant for life. There wasn’t a lot of upward mobility in those days. Piracy on the Spanish Main was one—possibly the only—relatively sure way a person born in poverty could become rich. Assuming you survived, chances were pretty good that a successful career in piracy could set you up for life.

A successful pirate could make more money in a single voyage than he could have otherwise made in several lifetimes. And having done so, he needed a place to spend that loot. Cities such as Port Royal were tailor-made for that purpose. In the seventeenth century, Port Royal was one of the two most important cities in the western hemisphere, and it set the standard for debauchery. It was dubbed “the wickedest city on earth,” a haven of taverns, gambling dens and houses of prostitution. This was a city that knew how to separate a pirate from his booty. In its heyday, Port Royal had one drinking house for every ten residents. A sailor could hit town with his pockets bursting with silver, and be dead broke (or just dead) within a day—a week tops, if he paced himself.

It’s as true today as it was in the Golden Age—women love a bad boy. That’s why pop culture in every age has celebrated the antihero, whether it’s a gangsta rapper, James Dean, or Valentino’s Sheik. And a pirate is the ultimate bad boy. But, more than that, women love the chance to be the bad boy. The lure of the sea was enough to give us such legendary (but completely real) figures as Anne Bonny and Mary Read, two women who could plunder and pillage with the best of them. Anne Bonny was the daughter of a wealthy businessman who was disowned when she married a pirate. She then ran away from the pirate for a better pirate. In the end, she decided to stop running away with pirates and become one herself. Mary Read’s boat was overtaken by pirates. She decided to join them, eventually meeting up with Anne and joining her in her adventures.

Life aboard ship was hard, and the food was even harder. There was no shipboard refrigeration. A ship’s larder was stocked with what could be had cheaply and stored for months to last a long voyage. But unlike law-abiding sailors, pirates were limited only by the pickings at hand. The shipping swarming the Caribbean came from countries all around the world—and served as a piratical smorgasbord.

And buccaneers learned from the original barbecuers. Before the buccaneers took to the sea to raid Spanish shipping, they lived in small isolated communities scattered across the region, and they learned from the natives to hunt wild pig and slowly cook it over burning coals on a lathe woven from green wood. The cooking surface was called a boucan. An eater of boucan was a boucanier, or later, buccaneer. The Spanish were offended by their very existence and tried to wipe them out. As you can imagine, the buccaneers resented this and took to the sea for revenge.

Many people are deterred from piracy by the thought that it required complex naval knowledge. As it turns out, there are alternatives to sea voyage. Pirates used to storm tropical ports, overwhelming defenders and taking all the loot they could find. Legendary pirate Henry Morgan actually had very little success at sea—his ship was always getting sunk or, on one memorable occasion, accidentally blown sky high. But put him at the head of a buccaneer army in front of a Spanish port town—say, Maracaibo or Panama City—and he was all the legend says he was!

Speaking of Henry Morgan, the Caribbean is home to a lot of rum. Sugar, water, yeast—rum! Pirates loved their rum—and not just for the reason you’d suspect: If you were at sea for any length of time, your store of water would start to go green and rancid, but the rum, which has a healthy dose of alcohol, would be as fresh as the day you poured it into the barrel.

When we think of the golden age of pirates, we think of the Caribbean. It’s right there in the name of the movies. But even in the Golden Age, when pirates flourished in the Caribbean, the savvy sea rovers got around. The Ivory Coast of Africa, the Spice Islands, and the Indian Ocean share equal billing as home for pirates. Madagascar became a Pirate Island. Long Ben Avery captured the Grand Mogul’s treasure ship in the Indian Ocean, the greatest single pirate deed of all time—and still managed to die penniless, so pirates shouldn’t ignore their financial planning.

For all but the rich and royal, fashion in the sixteenth and seventeenth centuries tended to be drab, severe, dark, and somber. Like so many other things, fashion was just one more place where pirates could show their disdain for society’s rules. What was the point of capturing all those fancy silks and fine fabrics if they couldn’t use them to dress as brightly and garishly as a New Orleans bordello?

The poundy, the pointy, and the boomy! If playing with things that worry your dear ol’ mum is your pleasure, then the pirate life is for you. First, there are the poundy: nice blunt objects like belaying pins, which secured heavy ropes to the ship’s railing, and the marlinspike, which was used for splicing knots. These served innocent nautical duties, yet could give a man quite a headache when swung by a pirate comin’ aboard. If pointy is your preference, try a cutlass: a short, heavy-bladed, single-sided sword. A longsword could get tangled in the rigging or be hindered in the cramped space below decks. A cutlass leaves ’em gutless. And for those of the boomy persuasion, the pirate world had it all, from cannon to flintlock pistols to the mighty blunderbuss!

A sailor on a merchant vessel worked long and hard, usually for little pay under harsh discipline, and he did it to convey someone else’s goods, so that someone else could get richer. Life was different for pirates. Pirates elected their own officers, and there were only a few people in command. Ships usually had just a captain and quartermaster. In the pirate’s egalitarian society, there was no need for a lot of supernumeraries. The captain would propose a plan and everyone would vote on it. The captain was only “in command” during battle. (Of course, exceptions had to be made when your captain was psychotic, like Blackbeard or L’Ollonais.) The rest of the time, everyone’s voice was equal. They all signed the articles (the list of rules that they ascribed to before going to sea) and had a voice in the ship’s actions, and each sailor was entitled to an equal share of the plunder.

So those are the ten reasons. But really, those all come down to different variations of the one real reason for being a pirate. It was true 400 years ago and it’s what we celebrate today when we put on the puffy shirt, the tricorn hat, the sash, the boots, and strap on a sword and pistol. It all comes down to one word, one idea:

Pick any of the other reasons you want to—food or rum or booty or travel or—or make up one of your own. They all come down to a pirate thumbing his or her nose at the world and saying, “I don’t care what you say the rules are. I’ll live my life free!” Historian Marcus Redicker said of pirates, “[They were] the common enemy of mankind, [but they were also] the freest people on earth.” Pirates may have been damned—but they were damned by their own hand. They set the conditions for their own life.

And that’s what so many of us who “put on the pirate” today are really responding to. Sure, we enjoy dressing up, swaggering and swearing and swinging our cutlasses. (Those of us of legal age enjoy the rum, too.) But it’s really the sense of freedom, the idea that we are living our own lives by our own rules, that is the clarion call of the sweet trade.

For instance, you may have noticed that we promised ten reasons for being a pirate, and have delivered eleven. To which we reply, “We’re pirates, we’re free to list as many reasons as we want to.”

And that, we’d suggest, is reason enough. 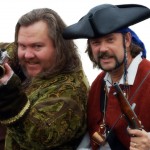