The Messengers, Monsters, and Moral Instructors of Islamic Literature

The lore of every culture in human history contains sentient beings that are more than or less than human. Elves and vampires, nagas and orishas, daemons and spirit animals—each of these creatures has powers beyond those of mortal men and women, and each is enmeshed in the moral and symbolic order of creation particular to the culture from which it arises. Their strange forms and powers, their familiar-yet-foreign drives and weaknesses, teach humans about what it means to live in this world and the worlds beyond.

The stories and scriptures of the world’s numerous Muslim cultures are no different. Islam’s holy book (the Qur’an), its contested doctrinal traditions (the Hadith), and its various folklores are brimming with powerful nonhuman creatures.

First of all, there is the constitutive presence of God Himself in these texts and traditions. Below the divine, there are also several lower orders of nonhuman beings present. Angel, Djinn, and Ghoul: each of these creatures appears in numerous Islamic scriptures or stories, from the Qur’an to the Thousand and One Nights to epic poetry. The cultures of Islam are profoundly diverse, of course, spanning centuries and continents. Local iterations of these beings reflect this diversity. But in every instance, when humans encounter these creatures, it is a test of faith, wit, and bravery.

“God sends down His angels, inspired by His command, to such of His servants as He pleases” — Qur’an 16:2

The angels were the first sentient creatures that God created. In Islamic painting, Angels often appear as handsome men in turbans with colorful bird wings—sometimes wings of peacock-feather. They carry swords or trumpets or books or gifts.

Angels have no free will. They exist only to worship God and execute his commands. This largely involves acting as messengers, but these messages can have great power: The angel Gabriel reveals the Qur’an to the Prophet Muhammad, verse by verse. Raphael blows his horn twice on the Day of Judgment, destroying the world and resurrecting the dead.

Some stories say the angels are done with visiting men until Judgment Day. Some say there are unseen lesser angels who help humans. Some say each human has an invisible angel bound to her from the day of her birth.

In any case, a wise hero greets the angelic visitor with the word “Islam”—that is, submission to God’s will. And the wise listener to—and reader of—the hero’s tale learns the virtue of piety from the hero’s dealings with angels, who carry the uncorrupted word of God’s will to mankind. The stories of the angels teach many lessons, but doing what God commands is chief among them.

“Cover your utensils and tie your water skins, and close your doors and keep your children close to you at night, as the Djinn spread out at such time and snatch things away.” — Hadith: Sahih Bukhari 4:533, Narrated Jabi bin ‘Abdullah

Just as God made human beings from blood and clay, He made the djinn from smokeless fire. They are sentient beings, and unlike the angels they possess free will. When Gabriel revealed the Qur’an to the Prophet Muhammad, it was for the benefit of men and djinn alike. As with men, some djinn choose to follow God’s scriptures and others choose to disobey.

The chief of these disobedient djinn was Iblis, who is very roughly analogous to Lucifer in Christianity. Here, as elsewhere, tradition varies: in some interpretations, Iblis is an angel who is in fact conforming to God’s will and design by being disobedient. In most stories, though, he is the most powerful of the rebellious djinn—those who refused to submit to God.

Yet direct encounters with Iblis himself are relatively rare compared to encounters with the lesser djinn. Oral traditions and books alike feature incredibly varied depictions of djinn—evil, mischievous, gravely pious; human-looking, bestial, otherworldly. They also disagree wildly about taxonomy. But several consistent characteristics emerge: Djinn live atop mountains, in the depths of the sea, or in magical hidden cities. They can generally fly or teleport. They are usually invisible, and can change shape. They are strong enough to do things like sculpt mountains into palaces with their bare hands.

Any of these creatures can, for their own purposes or God’s, test, trick, and torment men and women. Their means of doing so are varied: gifts that are more than they seem, abduction, magical Job-like persecutions, straightforward attack. A successful hero never responds with brute force, nor with the resigned fatalism appropriate to encounters with angels. The key to dealing with the djinn is resourceful wit. The hero tricks them into believing he is King Solomon or that he will be humbled by watching the terrible djinn squeeze into a bottle, where they can be captured. And those hearing or reading the tale learn that sly ingenuity is as heroic as martial valor.

“The King’s son followed her and discovered by her hooves that she was a she-ghoul, who was saying to her children ‘I brought you a good, fat boy.’ They replied ‘Mother, bring him to us so that we may feed upon his innards!’” — The Thousand and One Nights

Some Islamic traditions consider ghouls to be a subcategory of djinn, while others consider them their own order of being. Some say they were banished when the Qur’an was revealed; others say that the Prophet himself named verses of the Qur’an which, read aloud, could banish any ghouls Muslims might encounter in their travels.

In any case the details are usually the same: Ghouls are almost defined by their vicious cruelty and their ravenous hunger for human flesh. They lurk in dead spaces—desert, graveyard, forlorn wilderness—awaiting victims. In their natural form they are monstrous; humanoid with animal characteristics, grotesque proportions or hideously exaggerated features.

Chief among a ghoul’s magical abilities is shape-changing. In some stories, the ghouls assume the shape of disdained animals like hyenas. But more often they take the form of an old man or a woman alone on the road, feigning distress or seduction to lure in victims.

As with the djinn, wit is required when dealing with ghouls. But, given their horrific nature and unreasoning hunger, the even more essential attribute here is a sort of brave wariness. In the Thousand and One Nights, one traveling prince might boldly expose a ghoul’s true form after watching carefully enough to catch a glimpse of its hooves, while another might simply slay it with his sword. But in any case the true Muslim hero displays alertness and awareness, and, when pressed, unwavering courage.

The greatest heroes in Islamic tradition and history—from the Prophet Muhammad to Imam Ali, from Fatimah to Haroun Al-Rashid, from Saladin to Sindbad—display, to differing degrees, all of the above qualities. Piety, ingenuity, and bravery are hallmarks of nobility in Islamic story and scripture, hallmarks of being a good human. Therefore, the tales of angels, djinn, and ghouls from holy book, legend, and lewd tale alike serve not only to entertain and to teach about humanity’s Others, but also to teach us about ourselves. 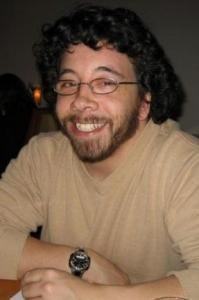 Saladin Ahmed was born in Detroit. He has been a finalist for the Nebula Award for Best Short Story and the Campbell Award for Best New SF/F Writer.  His short fiction has appeared in numerous magazines and podcasts. His novel, Throne of the Crescent Moon, is forthcoming from DAW Books.