The Unicorn Tapestries and Other Depictions: Beyond the Obvious Symbolism of the Unicorn’s Horn

At present, when one hears the word “unicorn,” the associations are obvious: a horned white horse, representing purity; a similarly chaste and pristine young woman; a series of single entendres. However, that wasn’t always the case. The image of the unicorn has undergone a series of fascinating shifts from classical antiquity to the contemporary period. In each time, the unicorn has represented both the unattainable … and the purest desire of the collective human heart. 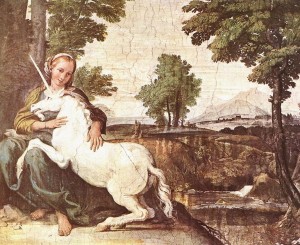 Known by its Latinate name (cornus, horn, shares the same root as cornucopia, the mythical horn of plenty), the unicorn has a long and storied history. Differing from local myths such as Gorgons and chimera, who may or may not have been real (but who certainly haven’t been encountered recently), creatures such as the unicorn were believed to be very real, if somewhat geographically removed. Scholars of the ilk of Aristotle, Strabo and Pliny the Elder all reference fleet one-horned beasts, which they commonly located in fabulously distant India.

Some believed them to possess magical qualities from the get-go: In the 5th century BC, Ctesias of Cnidus attributed the ability to detect poison and cure disease to the horn of the unicorn, making them that much more desirable. The “unicorns” of the early natural historians (called also monocerus, or, on occasion, cartazonos) resemble a variety of documented animals, from the graceful but double-horned oryx to the lumbering but single-horned rhinoceros. (In their defense, Marco Polo made the inverse error during his travels when he first encountered the rhinoceros in person, saying “They are not at all such as we describe them when we relate that they let themselves be captured by virgins, but clean contrary to our notions.” Indeed.) In a fascinating example of how oral transmission can affect a story, the unicorn appears to have been born from the amalgamation of different travelers’ tales, emerging an inadvertent chimera by the Middle Ages, with the delicate hooves of a goat, the tufted tail of a lion, and, of course, the famously spiraling ivory horn: He represented the desire to know the nature of the world, even unto its furthest corners.

Backwards formation inserted the unicorn into the Bible as well: Although the Old Testament references the re’em, contextually understood as a mighty horned beast who could not be tamed (and thought to have corresponded to the aurochs, known by the Assyrians as the rimu), the translators of the King James Bible made an editorial decision to translate the species of the re’em as well as its referent, transforming it into the unicorn. As symbolic representations go, in terms of virtue the unicorn fits nicely: The passages describing the re’em focus on its might and untamable nature, a characterization befitting both the might of God and the reputation which the unicorn had acquired by the fifteenth century (not a coincidence, as it happens).

During the Middle Ages, the unicorn acquired a dovetailing symbolism which played upon the notion of faith in the unseen, suitable for a mythical beast, and a pure love for the unattainable, inserted into the myth of courtly love via the purity of the virgin. The connection? The Virgin Mary, by way of one of the earliest bestiaries, the Physiologus.

Composed in Greek by an unknown author in approximately the second century AD and translated into Latin during the seventh century, the Physiologus provided a list of birds and beasts, fauna and flora, attributing complex allegorical meanings to them when appropriate. The unicorn was used as a symbol of Incarnation. In this version, the unicorn not only feels a magnetic pull to the lap of a virgin, but nurses at her breast, as Christ nursed from Mary.

The unicorn continued to be associated with Mary as well as with other, nonspecific virgins throughout its representation in medieval times, but by the thirteenth century, its reputation was expanded to allow for a more romantic personification: Courtly lovers were to worship their beloveds as the unicorn adored the virgin. This interpretation is preserved in the works of courtly troubadours and Christian philosophers such as Petrarch. This perhaps contributed to the more secular representations of the unicorn, as seen in the famous Unicorn Tapestries of the 1500s, where the unicorn leads the huntsmen on a merry chase before being captured and killed … and resurrected, pictured, in the final panel in captivity, a collar around its neck chaining it to a pomegranate tree (a popular symbol of fertility). By this point in time, the unicorn had also come to be seen as the symbol not only of chaste love but also of faithful marriage.

Nineteenth century scholar Thomas Bullfinch attributes the survival of the unicorn through the Middle Ages (alongside such creatures as the phoenix and the basilisk) to the fact that they had no connections to the “false gods” of Paganism. Certainly, this provides one plausible explanation for their popularity and their cooptation alike. Bullfinch describes the historical unicorn primarily through the lens of the classical philosophers, citing Pliny most extensively: He details the difficulty of hunting the prized creature, who was believed to be able to parry with its horn, and even to be capable of surviving great falls from rocky cliffs by using it as a kind of a pole-vault. However, his account of the medieval solution is … ingenious. He writes:

[…] they found out how to circumvent the poor unicorn at last. They discovered that it was a great lover of purity and innocence, so they took the field with a young virgin, who was placed in the unsuspecting admirer’s way. When the unicorn spied her, he approached with all reverence, crouched beside her, and laying his head in her lap, fell asleep. The treacherous virgin then gave a signal, and the hunters made in and captured the simple beast.

This reading seems to say more about the Victorian view of young women than it does unicorns: Indeed, as the unicorn myth continued to develop in a more secular society, many of its adaptations came to reflect as heavily—or more—upon its partner in crime as they did upon it. We can attribute that fact to the concretization of the unicorn myth in the Middle Ages and the changing role of women in society, as well as to the rise of the genre of fantasy in the nineteenth century, and the development of new generic tropes mete for the unicorn’s new environment.

Having appeared in many of the great romances of the Middle Ages which inspired the early fantasists, it’s not surprising that the unicorn would reappear in their indirect descendent, the fantasy. What is surprising is the direction its image has taken. In its earlier appearances in works like Lord Dunsany’s The King of Elfland’s Daughter (1924), the presence of the unicorn signals the incursion of magic, wildness, liminal possibility. But as the genre developed, it came to represent oh, so much more.

In works like Peter S. Beagle’s The Last Unicorn (1968), a unicorn quests for the last of her kind, signaling that magic has left the world … and restores it, albeit a little wiser, and a little sadder, now that she has known men. In marked contrast, Patricia C. Wrede’s “The Princess, the Cat, and the Unicorn” (1987) shows us the beginning of the backlash against the implications of the unicorn myth, where the unicorn’s desire for a maiden is a reflection of the worst of the hetero-normative expectations leveled upon young women for materialism, vanity, and shallowness. In Tanith Lee’s Unicorn Trilogy (1991, 1994, 1997), a girl’s repeated brushes with the species in all its guises—magical, mechanical, and everything in between—reveals the absurdity and possibility that are present within her normal purview, and herself.

And in Terry Pratchett’s Lords and Ladies, the unicorn’s fate tells us a lot about how far we’ve come. After sending the elves and all they signify—not just magic, but the alien magic that denigrates and diminishes humanity by comparison—back to Elfland, Granny Weatherwax shoes the unicorn. Not with iron, because the goal is not to subordinate it in turn, but with silver, in order to allow it to coexist in harmony with mankind in a way in which it hadn’t been allowed to in past iterations. The unicorn is no longer bound by the literal past mythology, where it has to die in order for humanity to benefit, and no longer artificially elevated by the fantasy tropes which Pratchett decries—tropes which create a hierarchy that places common humanity at the bottom of the pile. Today, our symbolism points to a hard-won détente: a truce between the magic of the unknown and the control of civilization. We’ve come a long way, baby—in our symbols, and in the desires of the collective subconscious that they signify.