We Are the Mountain: A Look at the Inactive Protagonist

Let me take you through the anatomy of an active protagonist, one that everyone can relate to. We’ll make our protagonist—we’ll call him John—young and healthy, male, of humble origins (perhaps he’s from a farming village). But his status will not be humble for long, for John is dreaming of greatness someday, or adventuring across the world, or perhaps winning the heart of the most beautiful princess throughout the faux medieval European continent he hails from. He’ll encounter myriad obstacles and antagonists along the way, but since he’s worked so hard from the bottom up, you know for sure he’ll get what he wants by the end of the story.

For John isn’t just a protagonist—he’s a hero, a Chosen One. He’s gotta be rewarded for single-handedly saving the world, after all (it’s nothing the right weapon couldn’t fix). There is no god, natural or supernatural phenomena, technology, society, or man who cannot be beaten and tamed by John’s sword. Not even himself.

I never said he was white. I didn’t need to. This description of John, albeit barebones, plays into the default assumption readers have of the heroes of these kinds of stories. The less specific his description, the more you can project how close he is to the default. But what gives his race away isn’t his name or the amalgamation of where he’s from.

It’s his almost fluid mobility toward his “destiny.” The same mobility that deems him an “active protagonist” in the eyes of a certain kind of reader.

This is a mobility that is not afforded to anyone who isn’t young, healthy and able, neurotypical, affluent/middle class, white, cis, straight, and/or male.

Now imagine that John’s obstacles, his conflicts, are a mountain. He can come at that mountain with a sword or a magic staff or an army or bombs—it doesn’t matter as long as he can get over it, around it, under it, through it, in order to reach his goal.

But what if his conflicts, his obstacles, are other people?

Every time this mountain is represented by a tribe of non-white people threatening to throw John into a volcano for the sake of a savage god; by a woman refusing to give him sex; is coded queer or trans in their villainous behavior; is given a tragic backstory rooted in the loss of a body part or a mental disorder or abuse; is a blue collar worker who turned to terrorism out of desperation—every time these “characterizations” are used, it reinforces that what is not default is to be beaten. Conquered. Killed.

Now let’s flip the script. Let me take you through the anatomy of characters who are commonly labelled “inactive protagonist.”

They are marginalized in some way, via race or class or gender or sex or ability. They will most certainly have suffered some kind of trauma (or three, or more), whether physical, emotional, psychological, or sexual. These two things have inevitably and inextricably colored not only how they perceive and navigate the world they live in, but how gods, natural or supernatural phenomena, technology, society, or other people react to them.

Make any one of these people the protagonist. They become the mountain and John and whoever and whatever he brings with him becomes a wave. Wave after wave of conflict and violence. This kind of protagonist is not going anywhere because their circumstances, their lack of mobility, keep them rooted to the spot, unable to take the wave head on. But they keep standing because it is either survival or annihilation.

This is also a valid way of presenting a character’s agency in fiction.

What do you do when coworkers gossip about your sexual activities when you file a case against a boss who touched you without your consent?

What do you do when your parents throw you out of the house permanently because you dared kiss someone of the same sex?

What do you do when your serotonin-deprived brain repeats daily the mantra that you are worthless, undeserving of the love of others?

What do you do when a hostile country rains bombs around your house?

What do you do when a pandemic rages and you cannot leave your house and your leaders have very little empathy and political will to educate on and distribute vaccines?

And not in the callous “oh, you’ll live” kind of way, but in a “I will hold on even though I am raw and bleeding and all out of anything to give because the only other option is the abyss” kind of way.

These are not problems that go away if you shake the right weapon at them. In fiction, it would feel cheap if a character could just swing their sword or wave their magic staff and poof, problem solved. No decent person would dare call people who survive these situations “inactive.” So why are characters called such when they choose to survive in fiction?

I see it all the time as a developmental editor. A BIPOC writer with one last fuck to give will come to me with their manuscript—often a competent and highly original story doing something new with worldbuilding or structure or form—and their beta readers’ comments, most of which are some refrain of “your protagonist doesn’t have any agency” or “your protagonist is just reacting to the plot instead of driving it” or “things just keep happening to your protagonist; they need more agency.”

The writer will ask me, “Could you read with an eye to see if that’s actually the case and tell me what I can do to improve?”

A suspicion forms in my mind and I just have to voice it. “By any chance, were your beta readers white?”

Every time, the answer is a resounding yes.

What is perceived as “activeness” in a character manifests the American values of rugged individualism, of “pull yourself up by the bootstraps,” of Manifest Destiny. “Activeness” in character, as promoted by the US publishing industry, ignores the contributions and influence of community and society on the personality and actions of the character.

Much of classical and contemporary literature and comics from both East and West is full of protagonists who simply observe (The Great Gatsby), who simply survive bleak or volatile circumstances (Beloved, The Unbearable Lightness of Being), who have no choice but to navigate the political sea around them at great cost (The Remarried Empress). But there is a strange insistence from contemporary US publishing to make characters in SFF “do something that affects the plot.” It demands that marginalized writers imagine characters with a mobility that they themselves do not have, resulting in characters that feel untrue to the writers but somehow fit a narrow vision of “marketability.”

This is not, by the way, a diatribe against conflict. It works perfectly in tandem with a three-act structure. But not every story is served well by three-act structure. And a character can experience conflicts without resolving these with a competition mindset. In fact, you can write an entire story without using conflict to generate drama, but that is another article altogether.

You could kill a villain to solve a problem, but that is only a short-term solution and may not even be true to the heart of your story. Your characters could solve problems through community building, through mercy and forgiveness, through acceptance of uncontrollable circumstances, through uniting and reuniting other characters, through reparations. Even through fleeing or through staying put.

Here’s the thing about mountains. No matter what is thrown at one, it keeps standing. Marginalized peoples often don’t realize it, but we have the strength of mountains. We actively overcome obstacles with the decision to stand our ground instead of charging in.

We are the mountain. And we are not going anywhere. 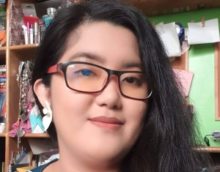 Vida Cruz is a Filipina fantasy and science fiction writer, editor, artist, tarot reader, and conrunner. Her short fiction has been published or is forthcoming from Strange Horizons, PodCastle, Expanded Horizons, and various anthologies. She has been nominated, longlisted, and recommended for the Hugo Award, the British Science Fiction Award, and the James Tiptree Jr. (now Otherwise) Award. She was a 2018 Tiptree Fellow and in 2019, she published her first fantasy short story collection, Beyond the Line of Trees. Currently, she’s a freelance book editor with The Darling Axe and is co-director of FiyahCon Fringe under the larger umbrella of FIYAHCON, a BIPOC-centered convention for science fiction and fantasy readers and writers.