She didn’t cry when it happened.
She knew before the news told the story.
She knew in the way that a woman knows
her lover is no more but
she didn’t cry. There were other things,
the children mostly, there were the children to shield
from the world and what would come.
“Monster!”
they called him as they struck him down.
“Beast!”
They shouted at his history.
But he was gone and
she watched her children in the sun,
laughing, playing, happy, safe.
“Mother,
Mother,” they cooed,
filling her arms that he had left empty. And
that was who she was and these were her children
and that was all that mattered.

She knew, and
she called them by the names
she had given them. Names now forgotten to history, to myth
but
she called them and they came grumbling, and whining,
on soft paws, tails wagging.
She plucked the nursing babe off her breasts and shushed his
hungry cries. She handed him to the oldest
and told them to wait, not to argue with Mother,
and just
wait.

They were coming;
all righteous belief, no doubt in their violence.
And she knew
that they brought vengeance, and she just
wanted her children to be children,
for just a little longer.
She watched as they disappeared back into the darkness,
not arguing, no longer whining, because they knew that something
was not right.
Waiting, stood with nothing but herself
ready to face whatever would come
to just protect them
just for a little longer.

They came in glorious white robes
and ringlets of gold. They came
with sandal covered feet that had never touched the ground.
And she stood before them,
unflinching before their blinding light
as they dropped the bits and pieces of her lover from their
gore covered hands. Leaving them as empty
as he had left hers.
They had come for vengeance. And they raised
sword, and ax, and lighting
against her. And still she did not move.

A bargain. Whispered dealing,
complicated threats and simple promises.
Because she was not him. A monster
but a mother
and isn’t this better, they sang over his corpse.
Be good, follow along, be alive.
Keep your children alive.

So she agreed. Because
what else could she do? They were just children.
Her children.
She could not protect them forever.

Later,
before they became known by other names.
Before they fell to heroes
who called them Sphinx, Chimera, Nemean Lion.
Before they were enslaved as guards
and called Cerberus and Ladon.
Before they became monsters she thought,
why did I do this?
Alone with them in their cozy palace underneath
rock and dirt. No sunlight here.
But her children played around her,
crying over broken toys and hurt feelings,
safe.
And she looked at their faces and thought,
“At least, this way, they can grow up, at least I can
keep them safe,
at least they can be children.”
Echidna, Mother of all Monsters
was a mother after all. 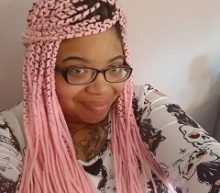 Donyae Coles is a writer of weird fiction. She’s been published on Pseudopod and in Vastarien. Her debut novel, Midnight Rooms, is forthcoming from Amistad Press. You can find more of her work on her website, donyaecoles.com, or follow her on Twitter @okokno.