My grandfather was a herbalist—
he mixed rare leaves and seeds, ground them together
& when he was done, he smeared the mixture on my forehead.
This will protect you from evil spirits, He said.

on feast days, he held the kola in his hands & blessed it
before splitting it in two and throwing one half to the ground.
The gods must eat. Never forget to feed the gods, He said.

my grandfather always poured palmwine to the ground before drinking
because the earth is always thirsty—for wine, for blood, for sweat.
Do not neglect the earth. From her we came, to her we return, He said.

the day my grandfather died, he was asleep in his room
when the earth opened up and swallowed him,
& when she was satisfied, she spat out his mangled remains.
He forgot to feed her so she took his blood to feed herself.
I wish I had been able to tell my grandfather,
Who the gods want to destroy, they turn into a slave. 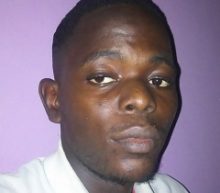 Oluwatomiwa Ajeigbe is a writer of the dark and fantastical, a poet and a reluctant mathematician. He has poetry and fiction published or forthcoming from Dust Poetry Magazine, The Future Fire, Eyes To The Telescope, Star*Line, Baffling Magazine, Kalahari Review and elsewhere. When he’s not writing about malfunctioning robots or crazed gods, he can be found doing whatever people do on Twitter at @OluwaSigma. He writes from a room with broken windowpanes in Lagos, Nigeria.