Of gravity      before gravity

Black man flew  before he was told to

Till he forget to look at the sky

Till Blackman forget he knew how to fly

Let me tell you something about the sea . . .  ahh, that one, she is lined with salt

So when they got tired of Blackman’s dreams of flight, guess what they did?

& everybody know too much salt ain’t good for flight

See the sea lined with salt

So guess what they did?

& everybody knows these days the sea is sick

& these days she throws up interrupted histories & dreams of flight

& What happens to the 1s that couldn’t fly

Force fed salt; Eyes away from the sky

Living bodies tied to the dead

The ones who refused to die

Without her tongue, ohhh no, see how the sea has a taste for salt

She does not let them go

To where they will never grow old 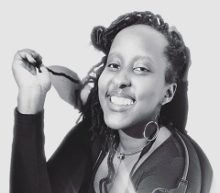 Shingai Njeri Kagunda is an Afrofuturist freedom dreamer, Swahili sea lover, and Femme Storyteller among other things, hailing from Nairobi, Kenya. She is currently pursuing a Literary Arts MFA at Brown University. Shingai’s short story “Holding Onto Water” was longlisted for the Nommo Awards 2020 & her flash fiction “Remember Tomorrow in Seasons” was shortlisted for the Fractured Lit Prize 2020. She has been selected as a candidate for the Clarion UCSD Class of 2020/2021. #clarionghostclass. She is also the co-founder of Voodoonauts: an afrofuturist workshop for black writers.