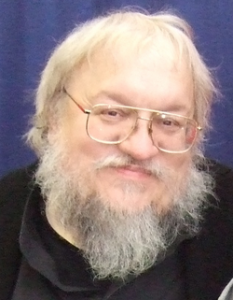 Before he was the acclaimed author of the multi-book series The Song of Ice and Fire and co-executive producer of its HBO adaptation, Game of Thrones (premiering April 17th, 2011), George R. R. Martin’s forays into epic fantasy began with short stories, novelettes, and novellas. A longtime speculative fiction fan, Martin began writing as a child, selling stories to neighborhood children and then fanzines. In 1971 he made his first professional sale to Galaxy, and four years later he won his first Hugo Award for his novella, “A Song for Lya.”

The following year, in 1976, Fantastic published his short story, “The Lonely Songs of Laren Dorr.” This story highlighted one of Martin’s greatest strengths: the ability to see the value of the smallest character and to give that character a voice. In the midst of an epic quest, Sharra, the “girl who goes between the worlds,” meets Laren Dorr, the keeper of a lonely world. “The Lonely Songs” only captures one part of Sharra’s journey, but for Laren it is the most significant part. He is only a stop-over, a side character, a cameo role in her life, but his world revolves around her. He has waited for her and reckons his existence by her appearance. Abandoned on the world for reasons so long past that he no longer remembers them, Laren’s only solace is song.

His songs paint the world as he imagines it once was. He sings of things that are haunting and beautiful and fantastic, ephemeral things that fill Laren and Sharra with longing when the song ends. Sharra’s story is greater, but Laren’s keeps us reading. Martin paints him in a number of lights: king, god, minstrel. Only at the end do we and Sharra see him for who he is: a complex character, aware of his own flaws and hopelessly in love with Sharra.

Martin planned to return to the strong, determined Sharra, but other, award-winning stories interrupted. In 1977, he won the Locus Award for his collection A Song for Lya and Other Stories, which included “The Lonely Songs of Laren Dorr.” In 1980, he won the Hugo Award and Nebula Award for Best Novelette for “Sandkings” as well as the Hugo Award for Best Short Story for “The Way of Cross and Dragon.”

Then Hollywood began to recognize Martin’s work. His short story, “Remembering Melody,” was adapted to an episode of HBO’s The Hitchhiker in 1984, and two years later Martin was invited to write for The Twilight Zone. His novellas “Nightflyers” and “Sandkings” were adapted into a feature length film in 1987 and into an episode of The Outer Limits in 1995 respectively. In between, Martin wrote for the television series Beauty and the Beast and developed Doorways, a series based on the opening line of “The Lonely Songs of Laren Dorr”: “There is a girl who goes between the worlds.”

At the same time, Martin was creating, contributing to, and editing the Wild Card book series—now up to its twenty-first book. This shared-world series honed Martin’s ability to manage a wide cast of characters. He pulled on this experience when writing his massive Song of Ice and Fire novels, which are known for chapters each told from a different character’s point of view, none of whom are entirely good nor (aggravatingly) entirely bad.

Apart from the forthcoming HBO adaptation, The Song of Ice and Fire has also spawned a collectible card game, a strategy board game, role-playing games, model figures, and replicas. Additionally, an excerpt from it, “Blood of the Dragon,” earned Martin his fourth Hugo Award in 1997, this time for Best Novella. Combined with the comic book and role-playing game adaptations of Wild Cards, fans’ demand for additional material testifies to Martin’s ability to write compelling descriptions of the small details within his sweeping visions. He often describes the writing process as a journey. Martin knows where he is, and he knows where he wants to go. It’s the unknown people and unknown places along the way that make the journey and his writing fascinating.

“The Lonely Songs of Laren Dorr” encapsulated this writing philosophy in 1976 when its narrator said, “We have only the middle, or rather a piece of that middle. The smallest part of the legend, a mere fragment of the quest. A small tale within the greater, of one world where Sharra paused, and of the lonely singer Laren Dorr and how they briefly touched.”