In this week’s Author Spotlight, we asked author Sarah Monette to tell us a bit about the background of her story for Fantasy, “The Devil in Gaylord’s Creek.” 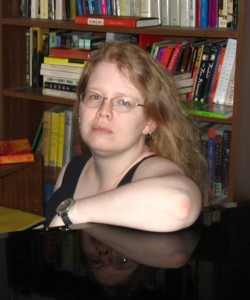 You described “The Devil in Gaylord’s Creek” on your blog as “the heartwarming story of a dead girl and her sword.” How did this story come about?

Well, obviously, Buffy the Vampire Slayer was a huge influence, particularly the character of Faith and the alternate universe Buffy we see in the season 3 episode, “The Wish.” Morgan and Francis actually come from a couple of dreams I had about a Slayer-like girl and her sidekick in a post-apocalyptic world, but when I went to put them in a story, the post-apocalyptic part sloughed off—except insofar as the economically depressed small towns of the mid-South always have a slightly post-apocalyptic feel to me. So the setting is based on the region I grew up in, and the plot comes from seeing roadside crosses (as, sadly, one does almost everywhere) and wondering about the stories behind them.

There are sections in this story that jump back and forth through time. How did you decide how to structure this story?

Originally, it was just the story of what happened in Gaylord’s Creek, with some inline digressions from Morgan about her past. But that was before I realized that she had died in order to become what she now is. That knowledge changed the weight of her memories, so they needed to be separated out. Then it was a matter of finding the right balance.

Morgan’s voice—sarcastic and strong—really carries this story. I felt she came across as a completely believable teenage protagonist. What’s the secret to writing compelling young adult characters?

I hadn’t thought of Morgan specifically as a young adult character before, although of course she is. So I guess my answer is that it’s the same as writing adult characters; you try to listen for what makes the character specifically herself. And—although I don’t think there’s any particular virtue in making your characters unpleasant people—don’t be afraid to let her be a jerk.

A larger world with its own rules seemed hinted at in “The Devil in Gaylord’s Creek.” When writing, how do you decide what to show and what to hold back? How much of the world and its characters do you flesh out before you start writing?

I’m a make-it-up-as-you-go-along writer. A lot of the details about Morgan’s backstory and world only appeared in the last round of revising. As far as deciding what to put in, I tend to try to limit it to what the viewpoint character would naturally tell someone. Since Morgan’s not interested in most of the whys and wherefores, she doesn’t explain them.

Do you plan to return to these characters and write more stories in this world in the future?

I don’t have any definitive plans, but, yes, the set-up was intentionally open-ended, and I would very much like to visit Morgan and Francis again.

So, what’s next for Sarah Monette?

I’ve got a book co-authored with Elizabeth Bear coming out this August from Tor: The Tempering of Men (sequel to A Companion to Wolves). Then late October/early November, a short story collection, Somewhere Beneath Those Waves, from Prime, and also the rerelease of my 2007 collection, The Bone Key. My next solo novel, The Goblin Emperor, will be published by Tor under the name Katherine Addison.