This wonderful story about communication and discovery has remarkably little dialog, and the lack only serves to enhance the telling. How did you approach the challenge of writing characters who did not share a common language, or even point of reference?

The true answer to this question has nothing to do with craft. “Miss Carstairs” was the second story I’d ever written—not in my life, but as a serious writer with a one sale under her belt. It was 1983 or 4, and I didn’t really know what I was doing. I had never been to a writer’s workshop, taken a course, or read a book on writing. I was simply trying to make my ideas and characters line up with my inspiration—a clay statue of a merman I bought in Provincetown in 1983 and put on the window of my beach cottage so it could look out to sea. I was also reading Darwin’s The Origin of Species, and was fascinated by his chapters on animal communication. Also teaching Freshman Composition to students who seemed to come from a different planet and a difficult patch in a friendship with a woman I liked enormously but found hard to get along with. Not that I was thinking about that consciously—I couldn’t have. Consciously, it was Darwin and the statue and the pros and cons of the solitary life. As for the communications, Darwin himself, in the first edition of The Origin of Species,hypothesizes about marine mammals evolving telepathy, which would have atrophied when they came to spend more time on land, but possibly not disappeared—kind of like a mental appendix. After reading that, how Miss Carstairs would communicate with her catch was pretty much set.

The narrative voice carries the story along, lending itself to the characters and setting, and harkening back to the fiction of the late 1800s and early 1900s. Why did you chose this particular setting and voice?

Well, what other voice would suit a story about Darwin and evolution and women who were educated and uninterested in marriage or charity work or even community (or at least the kind of communities open to them) and big, lonely houses above the sea? Seriously, though. At the time, I was reading a lot of 19th century fiction—mostly English, but some American. It was, as it were, the water I was swimming in and by far the easiest voice for me to write in. As for the setting, I was living on Cape Cod at the time—which has no cliffs, but hey. Gothic houses are set on cliffs. It’s a thing.

Fantasy is often defined by its tropes—mermaids, sirens, dryads—yet your merman deliberately subverts the hyper-feminine magical creature trope. What made you decide to flip this particular stereotype and present a distinctly male character?

Well, my merman statue was male, so there’s that. There’s also the fact that long-haired sirens with big breasts have always struck me as, er, aerodynamically unsound. I mean, think of the drag. Think of the difficulty of maneuvering really fast burdened with pectoral bags of tissue instead of fins. Sure, arms make up for something, but that’s more than balanced by the possibility of getting your hands tangled in all that hair. No, traditional mermaids would never have evolved. And this is a story about evolution, according to the best 19th century principles.

This story presents a merfolk species based more in the realm of science than one of magic. If you were to return to this world, what other magical species would you like to present in such a fashion?

When I wrote the story, I felt I was writing in this world, our world, one lacking any magic outside the ordinary miracles of scientific, observable fact. It might be interesting to look at some of the blended creatures from Greek mythology, like hippogriffs and centaurs, or from Pliny and Herodotus, like the headless Blemmeyae. It’s always fun to see what happens when you rub magic and science together. After all, they are strongly allied.

Many of your novels and stories focus on the struggle for personal freedom as seen through the lens of history, The Freedom Maze in particular. What spawned your interest in the history of such struggles?

Until you asked this question, I had no idea that’s what I was writing about, but of course you’re right. The thing about writing is that while you’re consciously researching and writing a story about, say, scientifically plausible mermen, asexual women, and the infinite varieties of human affection, your subconscious is busily weaving a different story entirely, about love that seeks to own, or plain, middle-aged, scientific spinsters trying to make a place for herself in a culture that doesn’t believe such a creature could possibly exist. So I guess I must be interested in such struggles, although I wasn’t consciously aware of it. Perhaps it comes from coming of age in the 60s. Perhaps it comes from having been something of a disappointment to my mother, who would have preferred a biddable social butterfly to the stubborn scholar she got. I did, however, get my love of history from her—or from the biographies of Eleanor of Aquitaine, Mary Tudor, and Elizabeth I on her bedside table. I always loved historical fiction, and when I started to write, that’s what I wrote. At first it was because the past was so much more colorful than the rather colorless present that was my graduate school experience. But it grew into a strong sense that it’s important to look at the past because our present grows out of it, both the positive and the negative. The past may be a foreign country where they do things differently, but it’s also our ancestral home that has shaped who we are.

Also, putting things in the past allows me to write about myself without having to reveal anything specific. I like that. And the clothes. I wouldn’t want to wear a corset, but I like writing about them.

What can we expect from Delia Sherman in the future?

More corsets. The book I’m going to start as soon as I hand in the one I’m currently revising is a clockwork-punk thriller-mystery-romance-ghost story-sub-Dickensian thing about a Welsh blacksmith’s daughter who becomes an inventor, moves to London, and gets mixed up with a Great Detective. After that, I’ve got a Hansel and Gretel retelling set in New York in 1929 to research and write. Possibly more short stories, although I’m not a natural short story writer and writing one takes me a lot longer than I wish it would. 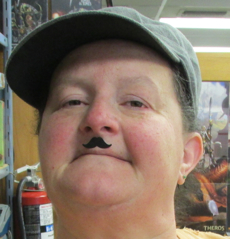 Sandra O’Dell is an avid reader, compulsive writer, and rabid chocoholic. She attended Clarion West in 2010. Her first collection of short stories was released from Hydra House Books in 2012. She is currently hard at work avoiding her first novel.