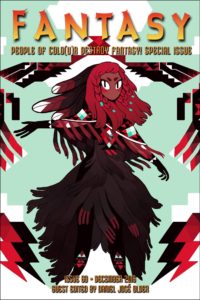 Funded as a stretch goal of LIGHTSPEED’s People of Colo(u)r Destroy Science Fiction! Kickstarter campaign, we’re happy to present a special one-off issue of our otherwise discontinued sister-magazine, FANTASY (which was merged into Lightspeed in 2012), called People of Colo(u)r Destroy Fantasy!: an all-fantasy extravaganza entirely written (and edited!) by POC creators.

The People of Colo(u)r Destroy Fantasy! special issue exists to relieve a brokenness in the genre that’s been enabled time and time again by favoring certain voices and portrayals of particular characters. Here we bring together a team of POC writers and editors from around the globe to present fantasy that explores the nuances of culture, race, and history. This is fantasy for our present time, but also, most of all, for our future.

Plus, there’s four classic reprints by Shweta Narayan, Leanne Simpson, Celeste Rita Baker, and Sofia Samatar. On top of all that, we also have an array of nonfiction articles and interviews, from Justina Ireland, Ibi Zoboi, Erin Roberts, Karen Lord, John Chu, Chinelo Onwualu, and Brandon O’Brien, as well as original illustrations by Reimena Yee, Emily Osborne, and Ana Bracic.